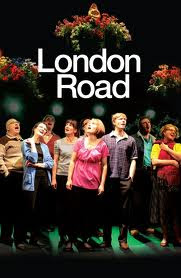 Not long ago I went to see London Road at The National Theatre. Despite it being a couple of weeks ago now the experience has lingered in my thoughts, it was one of the most incredible pieces of theatre I think I have ever seen. I have been trying to write this post ever since and have been struggling - how do you constructively say all you want to when everything comes out as a never-ending stream of 'so so good, so amazing.'. After many abandoned drafts, this is my attempt.
In late 2006 Ipswich was terrorised by a serial killer. Steve Wright was eventually arrested and charged with the murders of five young women all working as prostitutes in what was widely reported as the red light district of Ipswich. The national press reported every minute of the emerging story as soon as the police announced that they had the bodies of two women. It was a story that gripped the nation as it seemed that every day, another girl was reported missing.
I remember being captivated by the fact that these young girls were going out onto the streets to solicit knowing there was a killer targeting them because they felt they had no choice. They were drug addicts and this was their only way to pay for their habit. Who wasn't struck by the interviews the media held with various girls asking why they were putting themselves at risk, I kept wanting to scream that no-one chooses this, they were on the street because they were desperate, really desperate, no-one prostitutes themselves on the street as a career choice or to buy a dress you want. If they felt they had a choice they wouldn't be there in the first place.

London Road is a verbatim play set to music which reveal the community's story behind the headlines. The testimony of the 'residents' (played by a fantastic and varied ensemble of actors), conveyed that London Road specifically had battled for years with an increasing amount of solicitation and kerb crawling. When Steve Wright was identified as not only the serial killer but as a resident of London Road the community were left reeling.

As the play begins, opening in a community meeting, the residents communicated that this enormous social problem was only actively addressed by the community at large as a consequence of the murders and subsequent exposure. As a result various programs were implemented to help the girls get off the streets.

Alecky Blythe is a verbatim playwright, she constructs her play around interviews she holds with various members of a community. For London Road she spoke to various residents of Ipswich during and after the murders as this shocking case unravelled on their doorsteps. Adam Cork, the composer,  then identified, emphasised and further developed the natural musicality of their expressions into a very contemporary piece of musical theatre.

The music was beautiful and served to perfectly emphasise the sometimes startlingly, commonly shocking and always poignant comments and opinions of the residents of the area. The actors clearly had learnt the exact way these opinions and points of view of the residents were expressed, from the intonation, the hesitations and the stutters. The way we all speak in real life.The overall effect was mesmerising.

Watching it, completely engrossed, I couldn't help but repeatedly think, "You just couldn't write this".The verbatim style revealed so much, it was so thought provoking and insightful. There were people who were scared while the killer was at large,  people who were annoyed at the girls prostituting on their residential street, irritated by the ever increasing and intrusive media, alarmed by the dawning realisation that as a man you were a possible suspect.

It was fascinating, terrifying and utterly beautiful.
The staging was so simple yet highly effective at emphasising the everyman aspect of the ensemble with clumps of living room furniture all positioned around televisions.  I particularly loved the section where the residents' movements around their living rooms were severely restricted by police tape as they watched the media footage shot right outside their front doors.

The moment one couple identified that an arrest was taking place next door by watching it on the live news coverage was expressed in such a way that we, as an audience got to experience how horribly surreal it all was with them.


One of the most haunting sections was when we saw the girls of the street, the working girls, the incredibly vulnerable girls who Steve Wright seemingly picked off. Three girls emerged from the darkness where in  seemingly drug addled states they mumbled how they no longer work the streets and instead have some regular clients for money. Then they just stared at us in silence. Looking out at us all for about 3-4 minutes in complete silence they confronted us and any stereotypical views we had of of them. They represented the girls and the victims and that's what they were, just girls. Not monsters but instead vulnerable, damaged girls. They were as fascinated by us as we were by them. and then just as mysteriously as they arrived they disappeared back into the darkness. It was one of the most powerful moments I have ever experienced in the theatre

I could rave on and on about this production, I had heard it was fantastic the first time round it opened at The National and am just so appreciative of the fact I got to see it. It is back for a very limited run and I cannot urge you enough to see it if you can.

This is what a National Theatre should be doing, bringing the words and experiences of people to a stage to share and educate. I went to see it with my Uncle, an art therapist who works with people just like Steve Wright and the conversations this piece provoked were fascinating. You never get to hear the real experiences behind the headlines, the simple yet unbelievable accounts behind the tabloid sensation.  This production was not about Steve Wright, not about the girls he murdered it was about a community who experienced something so shocking and violent that it changed them, hopefully for the better.

A nice story you post here. It was attractive and nice. Thanks.

Very amazing post here you have created , thanks for shared .

A Best Hand Held Massager is smalleror cheaper than another doesn’t necessarily mean it’s less effective, it just means it’s designed with another purpose in mind. The first thing you should know about self-massage tools isthat they come in many shapes, sizes, and price ranges. Just because

I truly enjoy reviewing your post. It was a wonderful experience for having such a remarkable message.

Thanks for sharing this post with us. It's really an amazing post. Keep posting the good work in future too.

It looks stylish and really unique! Best business as well as best presentation! Have a great day.
car photo editor

Wow, very nice and detailed review of "London Road". I think this play left us think about what's going on surrounding us. Nowadays, we're getting so self obsessed that we don't have to care about our society. "London Road” seems very insightful and thought provoking I must say. Everyone should watch it at least once. However, the cover of the "London Road" is very eye catchy, very good editing work. Though there are so many options for editing for example image post production and so on. Thanks for sharing such nice review. Please keep sharing many more.
image post production

Wow, Very Useful post With important facts and information which can be very useful to us. I liked this incredible blog and its posts. Thanks For Posting Such an extraordinary article for us. in addition, I have a Photoshop clipping path service provider Website, Where we give a wide Rage of Photoshop image editing services.

This is very informative post. Thanks for sharing.
Photo Retouching Services

You can also visit: