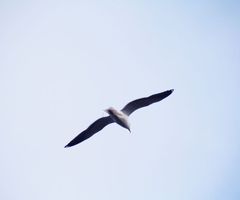 Tough audition today...
“Love the art in yourself, not yourself in the art”
- Stanislavsky
Posted by Paper-Rock-Scissors 1 comments

Always a sucker for a Sale I moved swiftly on receipt of an email from Topshop notifying me (and many others I've no doubt) of a Pop Up Sale.
As I have mentioned before I am on a colour injecting mission re: my wardrobe, so I hunted it down, laid my claim (entered my payment details) and today my catch arrived. 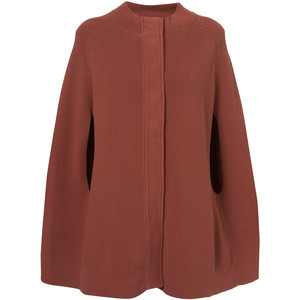 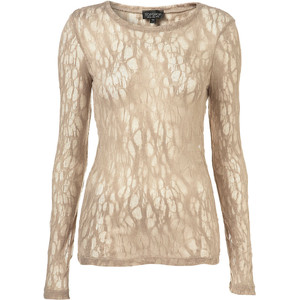 The Big One thinks its a cop out on colour, maybe he's right, guess I'll have to keep my shopping options open...
Sale shopping is complete denial shopping for me, particularly online sale shopping! I pur-chased a stunning pair of Max Mara straight leg black trousers on Ebay last week, or as I prefer to think of it, WON a beautiful pair of tra-la's!

The Very Best Seats in the House

Well my giddy aunt what a night I had last night (Monday eve)!
It was supposed to be a treat anyway, a scheduled catch up with one of my directors from drama school, the East15 legend that is Simone Vause.
I picked up some delicious and glittery cupcakes on the way ( on seeing them, she said they made her feel like a princess) from Ella's Bakehouse in Covent Garden. 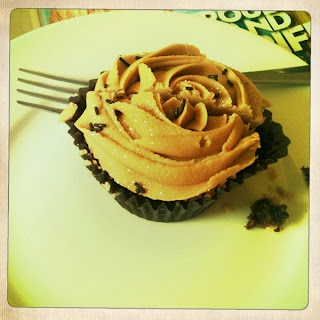 So I was already expecting a lovely night, catching up with a treasured friend and mentor, tucking into cupcakes and laughing...but then I arrived at her flat to be greeted with,
"Can you give me at least 2 hours of your time?"
"Yes, of course Simone"
"Great, because my friend Jayne has just called and told me that you and I are to be outside the Coliseum stage door in 20 mins and she will sneak us into the dress rehearsal of the English National Ballet Company's Swan Lake."
I was ECSTATIC! I could barely contain myself, how amazingly-incredibly-jaw droppingly INCREDIBLE.
I called The Big One, who was suitably shocked, impressed and then jealous. We wolfed down a pretty cupcake each and headed across the road to the Stage Door, we were taken backstage, then through a little door and given our choice of any seats we fancied in the entire and essentially empty Coliseum.
You don't need to tell me twice so I led us straight to the middle of the 4th row of the stalls. 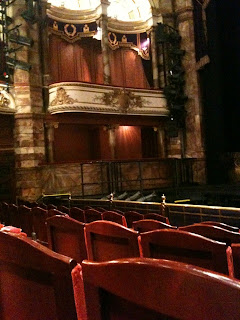 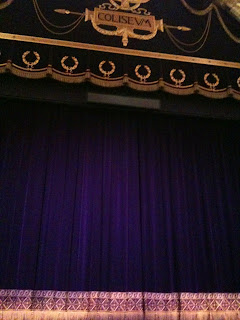 Now, a brief interlude to put this in context, The Big One and I have been glued to the BBC4 documentary series 'The Agony and The Ecstasy', a year behind the scenes with the English National Ballet Company. So when the directors emerged from that same little door we had just come through and took their seats right behind us to give notes, shout out corrections and generally be just as they are on the documentary I nearly jumped up and down in a very non ballerina-esque stylee.
They took their seats, the lights in the beautiful and enormous Coliseum went down and the curtain was raised.
Swan Lake the dress rehearsal began.
It was absolutely incredible.
A lot of the dancers who we'd been following in the series were in the cast, to see them dancing right in front of you is gobsmacking, frankly. Just seeing Swan Lake the ballet was a treat in itself (getting to see ballet is somewhat of an economic challenge for moi), but to be sitting so close, to be able to peer in at the orchestra, to be surrounded by the beautiful beautiful music and to witness first hand the skill, grace and athletic ability these dancers have...it was all quite overwhelming. I was genuinely like a kid again, I could not refrain from gasping and sighing, my mouth was consistently open, after each section I was bouncing in my seat desperate to applaud. I was utterly enchanted.
We were able to see the entire production (a few times the directors would make dancers re-do sections so really we saw it 1.5 times) and all the while we could hear the directors shouting out notes to the dancers, correcting them, commenting, critiquing lighting and set dressing - it really made the already brilliant experience even more special. I felt like the luckiest fly on the most exclusive wall.
The directors called a break after 3 Acts and I skipped and pirouetted to the bathroom (the entire theatre was empty which was also very exciting). It had totally brought out the jubilant child in me.
At 10:30pm it was finished, all 4 Acts had been performed and the directors gathered the company on stage for notes. Simone and I picked up our jaws and beaming we reluctantly left, walking backwards the whole time so we could still see the dancers practising.
Swan Lake opened tonight (the cast get one rehearsal with the orchestra, think of all the dancers who are sharing parts and didn't get to dance with them before opening) - I have no doubt it was amazing but it won't been quite as special as the night I had in the fourth row of the near empty Coliseum. It was magical and I will never ever forget it.

The dream is gone”
-Pink Floyd

I know this came out aaages ago but I just cannot stop listening to it.
It rocks.
Bigtime.
And this, just too too beautiful.

"Music washes away from the soul the dust of everyday life."
~Berthold Auerbach

Email ThisBlogThis!Share to TwitterShare to FacebookShare to Pinterest
Labels: dance, Katy B, music

Listen to the Applause!

A true, one of a kind, Star.
BTW: For all you subscribers, this is a video so you'll have to visit my blog to see it. It's a treat, you won't want to miss out!


"Today everyone is a star - they're all billed as 'starring' or 'also starring'. In my day, we earned that recognition."
Bette Davis

A Touch of the DG's (Domestic Goddess)

Yeah, you heard - I had a touch of the Nigella's today, a whisper of the Delia's and a fair amount of the Cath Kidstons.
I had one of those rare and special days, a very productive day without feeling that anything was much effort. The day went at just the right pace, I ticked lots of boxes and then, had time to make cupcakes AND do some knitting!
I got a good amount of work done, 2 wash loads (whites and darks), did a lot of washing up and several niggly chores that have been bugging me at 1am when I suddenly realise another day has gone by and yet again I forgot to;
re-arrange a delivery,
send a particular email,
source something useful,
book a restaurant.
Today, I did them all. I still have plenty of other things to do (organise drawers, file the evergrowing pile of paperwork, plant my spring onion seedlings) but the urgent/niggly/annoying things were all done today, calmly and easily.
Tomorrow's clearly going to be hard work in order to redress the balance but for today, I shall feel pleasantly chuffed with my day's gentle labour.
P.S And just to add to my lovely day I got offered a great job, without having to audition! Amazior!
Cupcakes for everyone!!

"Every day may not be good, but there's something good in every day."

Email ThisBlogThis!Share to TwitterShare to FacebookShare to Pinterest
Labels: cupcakes, home, just me

Today me and The Big One booked a mini break in April to celebrate another year together. After much debate and website trawling we decided on a beautiful looking boutique B&B in the Southern Lakes of the Lake District.
We will go on loooong walks, read, I will knit, we can try some Archery and eat and drink lovely scrumptious local delights.
Thank goodness we don't have long to wait as mentally today I think we were both already there.

"I roamed the countryside searching for answers to things I did not understand."
~Leonardo da Vinci

The New Wall of Inspiration 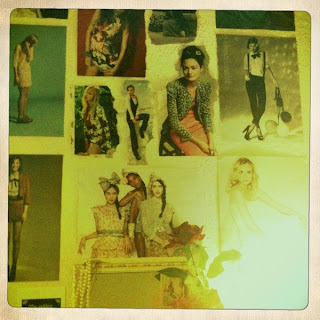 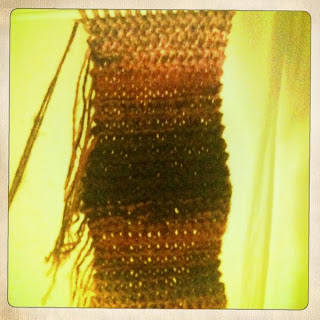 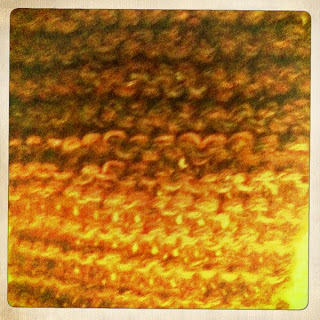 "A colour is a physical object as soon as we consider its dependence, for instance, upon its luminous source, upon other colours, upon temperatures, upon spaces, and so forth."
- Ernst Mach

This Saturday my sister,  Everything Is Better on the Weekend, took me to her local car boot to hunt for treasure and treasure we found! It was so much fun that I forget to take pictures but worry not as I shall go back for more rummaging!
Amongst a few other bits and bobs (picture frames, vanity jar) I found these... 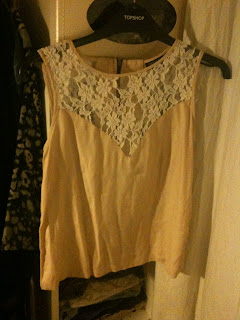 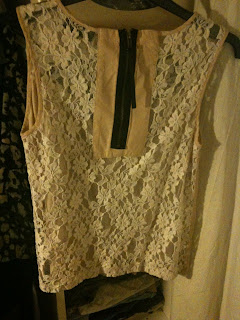 Out with the Old and In the with the NEW!

I am finding all these images for Spring wardrobes so tantalisingly full of cheery, chirpy colour that frankly it is making me want to throw out all of my current wardrobe and invest in a new, technicolour one.
If I could trade my black, grey and plum winter wardrobe for aquas, fuschias and pale lemon yellows I would skip everywhere everyday.
BUT really what appeals is the trade of seasons which I am sooo beyond ready for. This cold, damp grey has lasted for what seems a lifetime and I am desperate for the sun to wake me up in the morning. I want to be back out in my garden looking after my new emerging bulbs and clearing all the brown, glum leaves left over from autumn and winter.
There's no point wearing a palette of bright colour if the scenery outside is still muted. Firstly I'd be bloody cold in a thin spring outfit and strappy flats - my chilly blue/corn beef legs would clash in an non aesthetically pleasing manner and my spring fling feeling would soon shrivel as the shivers took over.
So until the weather changes from glum to glee, my dull, but warm, winter wardrobe will be safely hanging on it's rail unchallenged...for now.

"If you want an interesting party sometime, combine cocktails and a fresh box of crayons for everyone."
~Robert Fulghum